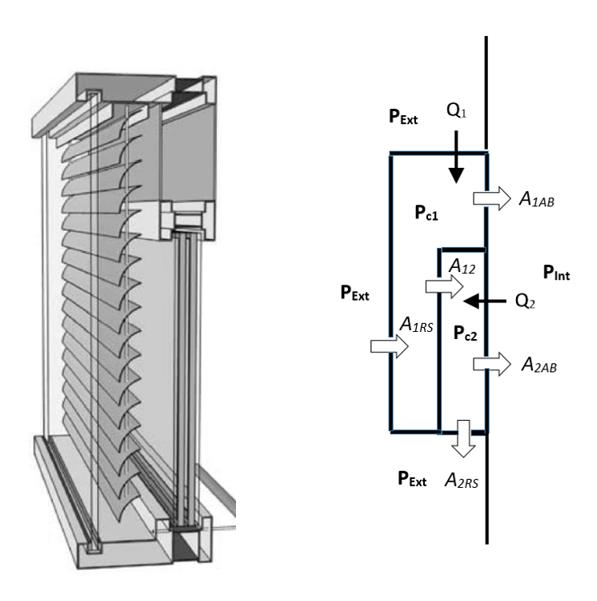 Closed Cavity Facades (CCF) are a novel trend for high performance double skin façades, providing a valuable benefit in terms of maintenance cost reduction. Current structural codes contain incomplete and conservative assumptions about the wind load sharing design for this type of multiple skin. In addition, in most codes glazing skins are investigated as separated structural glass elements, while it would be more appropriate to consider the structural interaction between the two skins. Indeed, the the CCF structural behaviour key is the air cavity response to wind loads and the way the cavity air supply is regulated in order to preserve low relative humidity. An optimal design of the outer and inner glass skin should take in account the superposition of the actions of wind and dynamic temperature and therefore the variable mass within the cavity. During the last years Ghent University and Permasteelisa have conducted a theoretical investigation and developed an assessment tool for the double skin structural design. The tool has been validated by means of an extensive experimental campaign. Several CCF elements have been exposed to on-site wind loads, solar thermal imposed loads and controlled laboratory quasi static and cyclic loading pressures. As such, the response to the natural climatic loading has been collected as representative of the CCF working conditions during its entire life. This paper is the last of a series of three documents that summarizes the outcomes about the research on the CCF panels. In the first paper the basics of the pressure-equalization model has been discussed and verified, describing in particular the extreme case of a fully closed cavity. In the second paper the permeability functions of the CCF have been derived as fundamental input for the dynamic simulations under variable cavity temperature conditions, which are the major objective of this third and last work. The experimental results and the numerical simulations are demonstrating the need for an improvement of the current codes. In particular, the simulations allow to account for a reliable load-sharing between inner and outer panes, leading to thinner glass panes. Note that this depends strongly on the airtightness levels of inside and outside, and manufacturing airtightness scatter should be accounted for ensuring a robust calculation approach.