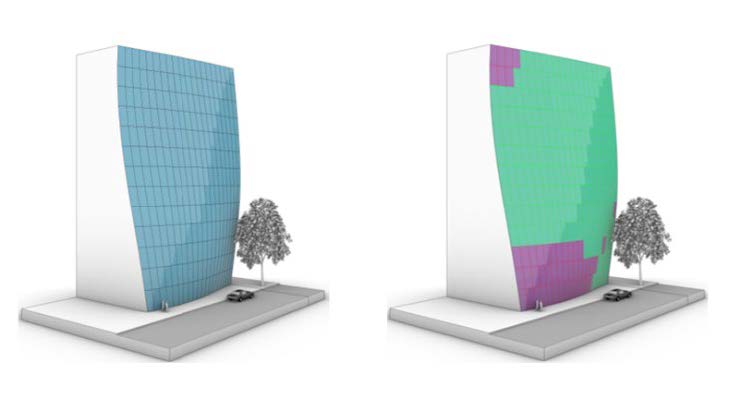 Curved and free-form glass façades represent a clear trend in architectural design. Hot bending is the most common technique used to produce curved Insulating Glass Units (IGU). Although its effectiveness has been proved in many projects, it is well known that it can also be very expensive due to the big number of moulds usually required to build up a free-form façade. As alternative to the ‘hot-bending’ technique, the increasingly used ‘cold-bending’ method is investigated in this paper being less expensive as well as more sustainable. Such method consists in imposing an out-of-plane displacement to flat insulating glass units and generally requires forces of limited magnitude applied on site during installation. Cold-bending introduces permanent loads into the glass panes, the glass interlayers, the secondary sealing as well as the primary sealing, the latter one responsible for the gas retention and the resistance to moisture penetration in the IGU cavity. The paper presents the results of FEM analysis as well as tests performed on double glazed units including Sikasil® IG-25 secondary sealing joints and SikaGlaze® IG-5 PIB as primary seal and investigates their behavior due to cold-bending and exposure to climate conditions in accordance with EN1279-2. The results show that appropriate FE analysis can well predict the behaviour of the cold-bent system and that the amount of out-of-plane displacement introduced in the IGUs does not affect their integrity and durability. As example, the cold-bent limit identified is applied for shaping a cold-bent IGUs façade in a high-rise building.